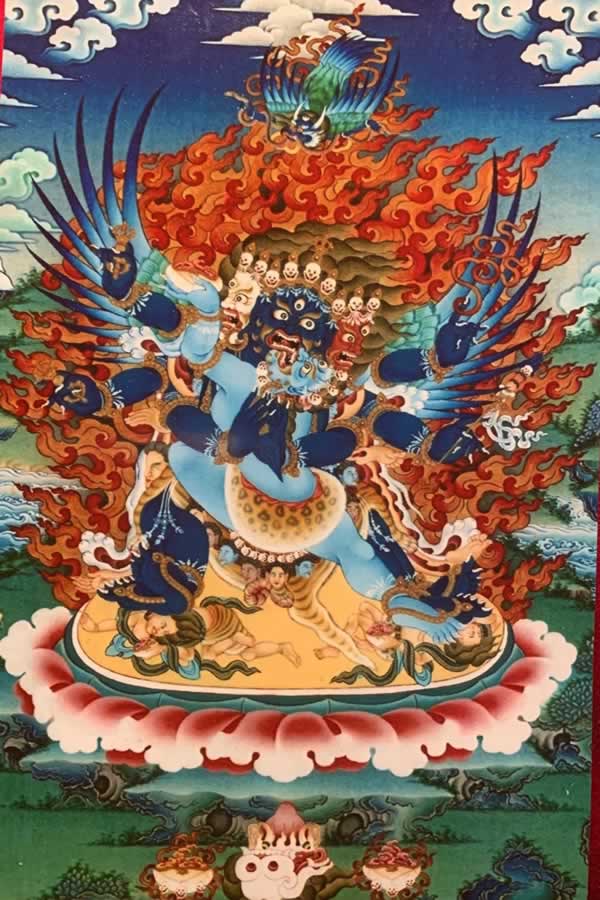 As I wrote about here, HE Garchen Rinpoche is currently giving teachings on a newly translated commentary by Karma Chagme ‘Union of Mahamudra and Dzogchen: Instructions to Gelong Rinchen (tr. Ina Bieler, Garchen Institute 2020).

Yesterday, Rinpoche gave one of the most profound instructions on the section of the text that deals with how to visualise a deity and why the view of emptiness/non-duality in inseparable union with great compassion for all beings is essential for any deity practice. He explained that great love and compassion for all beings, and wishing to attain awakening for all beings so that they can be happy and free from suffering, is no different than the mind/intention of the deity.  So when you have that kind of mind, you have the mind of the deity.  Also, that the view of the deity as being like a rainbow and without any inherent existence from one’s own mind is essential to deity practice. Karma Chagme says:

[So] first, without parting from the quintessence of practice, visualize the yidam deity clearly by having it appear as would a rainbow in the sky. [Then] visualize the ornaments and the various attributes clearly, as they would appear in a mirror. [And finally] visualize that, although it [all] appears clearly, it lacks any inherent nature, like the moon reflected in water.

Garchen Rinpoche explained (see video below from 50 minutes) that particularly when practicing wrathful deities, like Vajrakilaya or Yamantaka, it is a big mistake to practice them to try and attack or kill beings whom one perceives as enemies or hindrances. Doing this will lead the practitioner into turning the deity into a demonic spirit and lead to rebirth in lower realms. He says:

”There is a danger that if one misses the point of compassion and love for beings, that if one practises the deity and mantra in an ordinary way then one becomes like a demon with wings. So, in the bardo one may think one sees the deity but it’s really a hovering hungry spirit. For example, when practising Yamantaka and Vajrakilaya thiking that one needs to defeat a specific enemy and seeing the deity in a separate way, like one would see ordinary people, and practising it out of anger and jealousy towards others, then the result will be a negative one. The point is that one wishes to attain awakening that one engages in practice. However, if you engage in deity practice to achieve some worldly benefit or to harm others to attain some benefit to yourself and so on, then it becomes another cause for remaining in samsara. There is a danger that the deity becomes ordinary.

So, when practising wrathful deities it seems like they have anger because it says ‘kill them and slay them and destroy their flesh and hearts and so on. What does that mean? In the Vajrakilaya practice, it says malevolent ones are destroyed with wrath. So what is a malevolent one? It is a being who has made corrupt aspirations and accumulated negative karma so that now they appear in the world as causing destruction, pain and illness to others and cast spells on others out of anger, jealousy and afflictive emotions.

The three afflictive emotions of ignorance, hatred and lust abide in the body. Ignorance abides in the flesh, lust in the blood and hatred in the bones. These are the three causes for birth in samsara and so they need to be destroyed in those wrathful practices, because when they are destroyed is when they are not present in the minds of beings, then their minds are primordially pure. Sentient beings are primordially Buddhas.

So we engage in these practices in order to liberate from these afflictive emotions Some sentient beings have accumulated very thick layers of negativity and in those wrathful practices we bring those to mind, and these are offered as the aggregates of flesh, blood and bones to the deity. Offering such destruction becomes like undergoing surgery, so that it purifies the consciousness and purifies their mind and places those beings in the state of Buddhahood.

If there is anything to be angry at it is the afflictive emotions. Saying those harm-doers and obstructors are ‘destroyed’ means their afflictive emotions are destroyed and their consciousnesses are purified. All harm is caused by hatred, anger, jealousy, greed, lust and so on. So, if in one’s own mind there is self-grasping and seeing self and others, and I act out of afflictions to harm others sentient beings, then I harm myself. One should watch one’s own mind. It doesn’t really matter what the other person does. Look at your own mind. If it is pure and has pure motivation then you are good but if it has evil and bad thoughts then you become a bad person. In the Bodhisattva’s Way of Life, it says that sentient beings ignorantly destroy their own happiness like they would destroy an enemy. So, when we hurt others out of anger and jealousy in future lives we experience suffering and so on. That is the wheel of samsara. We kill them now and they kill us back and it’s like an endless circle. Karma proliferates endlessly. These wrathful activities put a stop to such evil karma. It is brought to an end by transforming the three poisons into flesh, blood and bones and offering them as a feast to the deities. By doing so the consciousness becomes free of attachment and ignorance. So, when we practice a wrathful deity, this is how we need to understand the essence of the practice. We practice the wrathful deity in order to establish sentient beings into the state of awakening.”

Garchen Rinpoche completed the teachings yesterday with a quote from the Drikung Kagyu founder and master, Jigten Sumgon[1] from the (Serkhangma) Golden Temple (54 mins):

‘A mountain of abuse/concepts is destroyed by the invincible vajra I pay homage to!’

The vajra there being the view of emptiness indivisible from compassion.  He concluded by stating that of all practices to dispel hindrances and enemies, the best one is guru yoga.

Edited transcript of Garchen Rinpoche’s teachings based on oral translation by Ina Bieler.

Teachings from yesterday can be viewed online here:

Here is a video of HE Garchen Rinpoche reciting the Vajrakilaya mantra:

For an online article by Lee Kane on wrathful deity practice, see here:

[1] Jigten Sumgön or Jigten Gönpo (1143–1217) was the founder of the Drikung Kagyu lineage and main disciple of Phagmo Drupa. He founded Drikung Thil Monastery in 1179. Jigten Sumgön and the Drikung lineage are best known for the set of teachings known as The Five Profound Paths of Mahāmudrā (phyag chen lnga ldan). Some of Jigten Sumgön’s sayings were collected by Sherab Jungne into what is known as Gongchik (dgongs gcig, “the single intention”), a profound philosophical compendium that further developed in commentarial works written in following generations.